The response of a non-minimum phase system to a step input has an "undershoot". This means, if the output was initially zero and the steady-state output is positive, the output becomes negative before changing direction and converging to its positive steady-state value. These systems are difficult to control due towaiting time until the initial undershoot for a positive gain system or overshoot for a negative gain system.

Response of an NMP system

The response of an NMP system is shown as "System 2" in the figure below. The "System 1" response shown in the same figure is from a "normal" process. 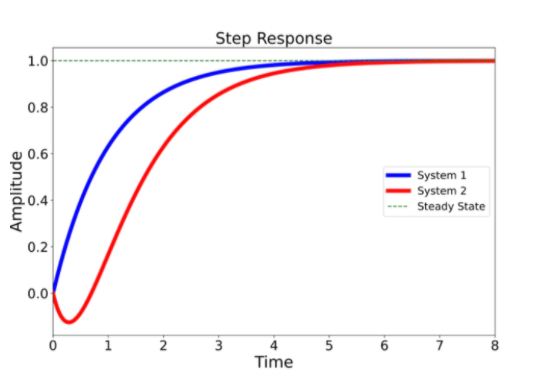 There are numerous examples of these systems. For process control engineers, the swell and shrink effect of the boiler steam drum level is a famous example of an NMP system.

Changes in steam demand affect the Boiler's steam flow, leading to changes in pressure in the steam drum and the boiler circuit. The change in pressure affects the boiling point and density of the water and steam. These combined reactions will cause the level in the steam drum to increase or decrease rapidly, which is commonly known as the swell and shrink reactions. The temperature difference between feed water and steam drum also causes this effect. If the level in the drum is low and the controller injects more feed water which is below boiling point, it will stop the boiling process in the drum, leading to a reduction in steam bubbles and level drop. So the injection of more water leads to an initial drop in level until firing restart to increase the temperature that grows the bubbles and level. The swell and shrink reactions are in the opposite direction to the normal behaviour of the boiler process.

The unstable energy input to the Boiler can also cause pressure changes that result in the same swell and shrink reactions, making control of the steam drum level extremely difficult through classical feedback. Various more advanced control schemes are required containing cascade control, feed-forward control so on.

As an example for drum level control single, double and three element controller schemes are shown below.

The above controller schemes are challenging to tune manually. At least it will be a time-consuming project. With INCA software, the job will be done in no time.

Below the example of drum level tuning with INCA PID Tuning software is shown.

Do you want to learn more about or PID tuning software? Request a 30-minute live demo and gain insights into what you can achieve with INCA Tools PID Tuning. It is all you need to get your PID tuning the first time right.