Steam drum is a vital part of boiler system in chemical industries. proper and safe functioning of boiler depends on various parameters such as level of steam drum, flow of feedwater and flow of steam. The pressure, temperature and level of boiler system cannot be regulated directly but depends on the feed-water flow. The pressure or temperature in a boiler system can be maintained by controlling the flow of fuel and air whereas the level can be maintained by regulating the flow of feed water. The purpose of drum level controller is to keep the level at desired value, optimal interface level requires between steam and water within the steam drum. It is essential that the level of liquid must be low enough to assure that there is appropriate separation between steam and water and high enough to guarantee that the water exists in every steam generating tube.

In this blog we will show the 3 most common drum level control schemes and what tuning strategy you should adopt for every strategy.

There are various components that affect the level of steam drum:

The design of the boiler drum level control strategy is normally described as:

Single element drum level control is the easiest strategy suitable for small boilers that have low and moderate variations in load/disturbances. In this approach, the level is being measured that helps in controlling the flow of feed water to maintain the steam drum level. Due increase or decrease in demand of steam, phenomenon like swelling & shrinking occur in steam drum which makes boiler operation tedious. The drawback of this approach is that level of steam drum is affected by uncontrolled feed water and steam disturbances.

From a controls point-of-view, the boiler drum is an integrating process. This means that any mismatch between inflow (water) and outflow (steam) will cause a continuous change in the drum level. Integrating loops are difficult to tune and can easily become unstable if the controller’s integral time is set too short (i.e., high integral gain). The process-imposed requirement for a long integral time makes the loop slow to recover from disturbances to the drum level.

Addition to above, the boiler drum level is notorious for its inverse response. If the drum level is low, and more feedwater is added to increase it, the drum level tends to decrease first before increasing. This is because the cooler feedwater causes some of the steam in the evaporator to condense, causing the volume of water/steam to decrease, and hence the drop in drum level.
Conventional feedback control has difficulty in coping with this inverse response. A control loop using high controller gain and derivative action may work well in other level applications, but it will quickly go unstable on a boiler drum level. Stability is best achieved by using a low controller gain, long integral time, and no derivative. However, these settings make the controller’s response very sluggish and not suitable for controlling a process as critical as boiler drum level.

Drum level is affected by changes in feedwater and steam flow rate. But because of the very slow response of the feedback control loop, changes in feed flow or steam flow can cause very large deviations in boiler drum level. Single-element drum level control can work well only if the residence time of the drum is very large to accommodate the large deviations, but this is seldom the case – especially in the power industry. For this reason, the control strategy is normally expanded to also include feedwater and steam flow.

Two element drum level control strategy is effective for the boilers with moderate variations in load. In double element level controlling the swelling and shrinking effect of boiler drum is taken care. Pressure of the drum varies according to steam flow. if load increases and drum pressure drops. In two element controller this effect is compensated by measuring steam flow along with drum level. Steam flow will give incorrect feedback if it is not compensated suitably according to stem pressure and temperature. Flow of steam has direct relationship with pressure and temperature. So, in most of the causes measurement of steam flow is compensated by pressure and temperature. The drawback of this strategy is that the disturbances due to steam drum pressure and variations in load cannot be adjusted in feed water supply as this variable is not measured in this control strategy.

It is a tedious & critical job to tune these controllers, Manual PID tuning require a lot of time & detail knowledge of loop interaction. PID tunning tools (Like Aptitune) makes it easy to tune these loops. One of the examples explained below. 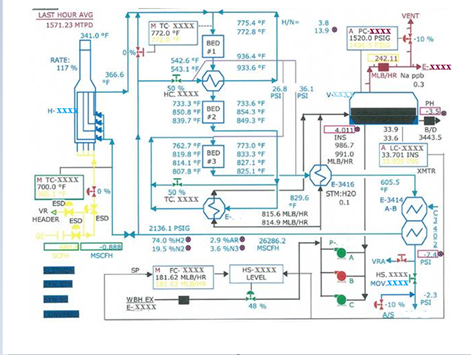 The above figuree explains the three-element control scheme where IPCOS has tuned & stabilized level with Aptitune software. As per control strategy drum level will be master loop & make up water slave, steam flow act as feed forward for tuning. The figure below shows the improvement in level with tuning. 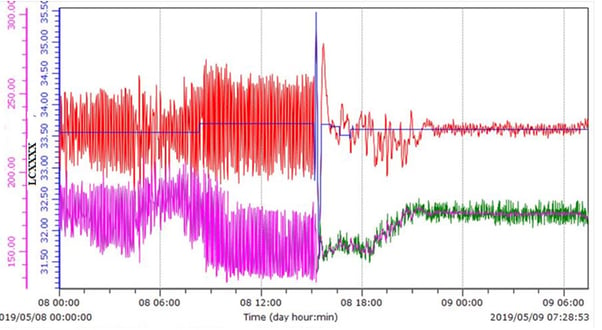 Above all proposed schemes can be implemented easily in DCS by using the standard DCS blocks and calculations. Other than implementing a correct control scheme, it is equally important to tune the PID loops correctly and how it helps to stabilize drum level explain above with example. software can calculate the right parameters; you don’t have to look at it again. In the end, the software helps you achieve the desired result faster.

Would you like to receive more information about PID tuning software like INCATools PID Tuner? Schedule a meeting with one of our control experts. We are happy to help you with information tailored to your needs. Talk to an expert today!

Or do you want to know what INCATools PID Tuning can offer you? Request your demo here.