Smith Predictor: when to use it and how to tune it

From refineries to petrochemical and chemical industries, the Smith predictor is used to improve the control of processes with a long dead time. The delayed behavior of the process is compensated by using an approximated model in the control structure. It is common for process control engineers to evaluate the need for such control structures and keep them performant. This blog explains the consequences of a long process dead time and what tools to use when tuning your Smith Predictor.

Risks of a long dead time in PID control

The Smith predictor was proposed in the 1950s to compensate for the long dead time of a process and significantly improve the control performance. Time delays are inherent in various chemical processes. However, a dead time greater than the time constant of a process can severely deteriorate the PID control performance. For example, a first order plus dead time process response with a 5 minutes time constant, 10 minutes time delay and a gain of 5 is used. The long dead-time of the process severely limits the closed-loop performance after a set-point step change. A more aggressive PID tuning quickly creates oscillations if a faster closed-loop performance is desired. The figure below shows the oscillations caused by increasing the proportional gain from 0.05 to 0.15 (with an integral time of 376 seconds). The integral action of the PI controller (standard form) becomes too aggressive, and a desired tuning with no overshoot (K=0.05) is too sluggish.

Structure of the Smith predictor

The structure of the Smith predictor (shown below) is equivalent to an Internal Model Control (IMC) structure, where a model of the process compensates the delayed behavior of the process. An internal model predicts the process's delay-free response, which is used in feedback to calculate the difference with the desired output (output error) and adjust the corresponding control action. The modelling error between the actual process output and a prediction that takes the dead time into account is fed back through a filter contributing to the overall output error signal to reject external disturbances.

By removing the dead time, the integral action can be increased, and better control can be achieved. The performance of a Smith predictor heavily relies on an accurate model of the process, and model identification is key to its success. Modelling errors can severely hinder its performance.

INCA PID Tuner® and INCA Aptitune® are model-based PID tuning tools that can support you through the entire process of tuning a Smith predictor. They can directly collect step-test data from the OPC server to identify a low-order model of the original process. This model (with and without the delay) is then used to get the optimal PID tuning parameters. The main advantage of using INCA Aptitune® when compared with standard tuning rules is the ability to compensate for the modelling error by introducing extra gain and delay margins in the tuning. This is especially important to account for modelling errors ensuring robustness when tuning a Smith predictor.

Following the previous example, we can tune the PI controller in our Smith predictor using a first-order approximation of our process behavior without the delay (gain of 5 and 60 second time constant). A low-pass feedback filter is used to eliminate high frequency disturbances. Using INCA Aptitune®, the final PI tuning parameters have a proportional gain of 0.25 and an integral time constant of 376 seconds with a dead time margin of 120 and a gain margin of 3 to ensure robustness. This means stability is still ensured even if the actual dead time of the process is 2 minutes larger and the actual gain of the process is 3 times larger than the approximated model used for tuning. The figure below shows the improved closed-loop performance of the Smith predictor when compared with the original PI controller. 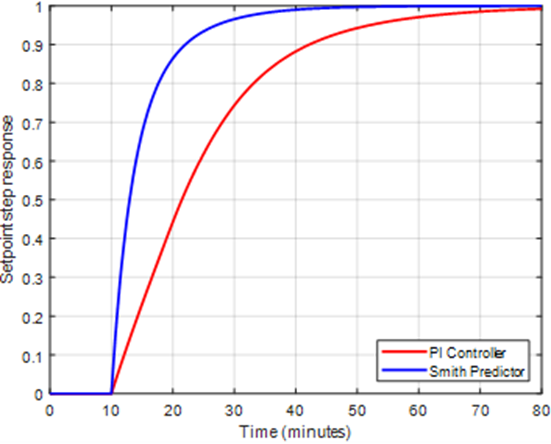 We are happy to advise you on any tuning and APC projects. The right tooling can help you accomplish optimized plant performance.